Weekend Round Up (Feb 5th/6th)

Our U-14’A’ team put up an absolutely brilliant performance against Premier division side Corinthians, ranked 5 divisions above them, before succumbing 2-0.

Corkbeg U-13 team had a big win away to Ballinhassig, with Tim O Driscoll(3), Shay Rooney, Hugh O Lionsaigh, Jake Morrissey, Conan O Leary and Jack Cahill with the goals.

Our U-12 team went down 4-0 to local rivals Midleton, while our U-15 team were beaten 3-2 by Avondale in Whitegate on Saturday morning.

In league action, our U-17 team travelled to Youghal on Saturday afternoon and came away with a brilliant 4-2 win, courtesy of goals from Cian Hegarty(2), Aaron Walsh and Jack Flynn.

Well done to our U-12 Girls team, who made the short trip to Ballyduff in Cloyne on Saturday morning, to play their first ever game on a full size grass pitch against the home side, Churchvilla. Not a morning for shorts and t-shirt, that’s for sure. Many thanks to Churchvillas Fred Wenham and his crew for a very competitive game. Well done, everybody! 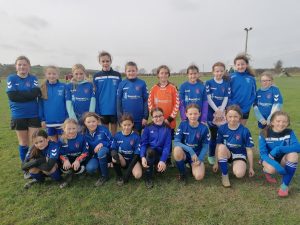