Corkbeg U-17s rounded off their league season with a 5-2 home defeat to champions Mogeely in Div3. 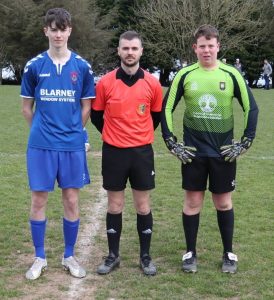 Corkbeg ended the season as runners-up to their East Cork neighbours. Conor Byrne and an own goal made up Corkbegs total on Saturday afternoon. 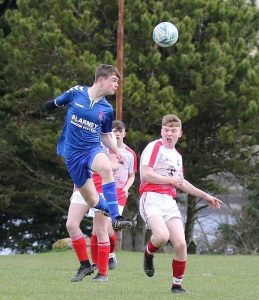 Congratulations to Mogeely on their well-deserved league win. 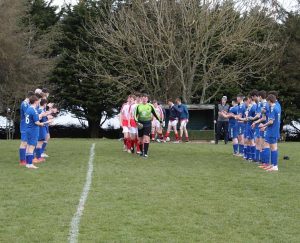 U14 Div1 – Mayfield 1 Corkbeg 3.
Corkbeg visited Mayfield AFC on Sunday morning for an early kickoff.
Some good pressure and excellent delivery led to team captain Cillian Scanlon netting an early lead, 1-0. It stayed this way up until half time.
The Beg then netted a well worked goal by Josh McCarthy, 2-0. Mayfield piled on the pressure with multiple corners, that were well defended, and a cracking save from our goalie Sam Mc.
A free outside the box for Mayfield was well taken and converted, 2-1. As we entered the last 15, the tempo was high and our hardworking defense, midfield and forwards kept at it.
The hardwork paid off, with Tristin Ward taking on the Mayfield defense and converting, 3-1 .
It finished that score but we were unlucky not to get more, some lovely play between Jack Mulcahy( our February POTM) and Cormac Crowley led to a strike from Cormac well saved by their keeper. Hard again to pick a MOTM, came down to Aesa and Jackson again. Jackson got it this time.
The lads hard work and commitment is great to see and brilliant to see them really enjoying their football.
U13 Div3 Lakewood A 1 Corkbeg 6
After a draw last time out I mentioned our Achilles Heel this season: not converting all of the chances we create. Well players and coaches concentrated on finishing drills in our recent training sessions and how it paid off on Saturday morning against Lakewood Athletic.
The Beg played some great football in the first half and really dominated the 30 mins taking full advantage of a slight breeze. Within 10 mins we were up 2 after Conan O Leary (pictured with the Lakewood captain) slotted home coolly on both occasions 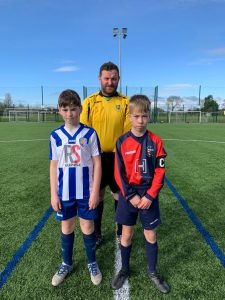 .
We conceded a free at the edge of the box just before the break and a superb free from the home side saw us go into half time, 5-1 to the good.
The home side definitely came into it more in the 2nd half, but our defence and midfield were well up for the challenge; Jake M doing particularly well on the right wing and there was some fantastic passing moves that deserved a goal, but we got flagged for offside on a few occasions.
Then came the goal of the game from a free kick; some quick thinking from Jack, deftly chipping the ball over the wall for a precision pass to the feet of Shay Rooney and he finished brilliantly (pictured). 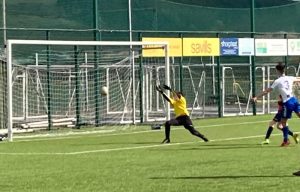 Enda presented Jack with the match ball at the end, with a message that it was due back at training Monday evening. 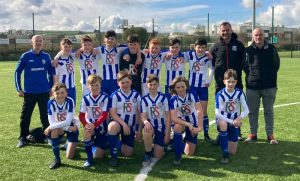 Elsewhere, the CSL Small Sided Games Series began. Games were played at U7, U8, U9 and U10 level at Watergrasshill, Carrigtwohill and Whitegate.

On Sunday afternoon, Corkbeg U9/10 team played their first ever game against Carrigtwohill U9 team. There was huge excitement and plenty of goals.