Schoolboys Round Up w/e 2nd October

Corkbeg U-18s had a comprehensive win over East Cork rivals on Sunday afternoon in Whitegate.

Despite going a goal down early on, Cian Hegarty, Aaron Walsh (pictured), Finn Crowley, Tommy Archer & Nicky Bertocchi were all among the goals, as the lads continued their recent fine form. 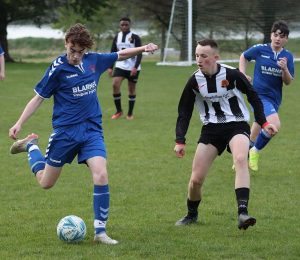 U14 National Cup – Blarney United 0 Corkbeg 5
We travelled to O Shea Park Blarney for a 10am KO and what a performance we witnessed from start to finish from the Beg.
We dominated from the off and took an early lead with a cracking goal from distance from Alex Jaworski. If that wasn’t good enough, he repeated it a few minutes later with another screamer into the top left corner.
Conor Padden then add the third and Hugh O’Lionsaigh the 4th and we went in 4 up at the break.
In the 2nd half the tempo dropped, but Corkbeg continued to play some great football and created more chances. We finally got the fifth and final goal of the game when Alex completed his hat trick

by rounding the keeper and slotting home for a great win.
A really top class performance from all the lads today, the work rate the passing the team work was brilliant throughout. We move on to the next round of the NC and look forward to the challenge.
U12Div10 – Springfield Ramblers B 1 Corkbeg A 1
Great performance on Sunday by the 12A lads on the Stephen Ireland Astro in Cobh. A bright start by both teams and some great exchanges, but a good ball through the defence saw us go one down.
What followed was a great response by Corkbeg with plenty of chances on goal.
Second half started the same as the first, with plenty of chances for both sides but an outstanding performance by goalkeeper Conor O Neill kept the score at 1-0.
Corkbeg created plenty of chances on goal themselves, but a soft free kick on the edge of the box brought out the best of O Neill again to keep the score 1-0.
Some consistent pressure from the Beg finally broke the Ramblers defence and was slotted home by Paddy McGovern, now 1-1.
Some outstanding defence by the Corkbeg back three, kept Ramblers at bay and we had a chance to win at the very end with some great individual skill by Ross Mahony, who saw a shot go just wide at the death.
A huge effort from everyone and a great result for the lads. C’mon the Beg.

Josn McCarthy with the Corkbeg goal, as the U-15 team narrowly lost to Carrigtwohill on Saturday morning.

U-12- A difficult day for our U-12 side against an excellent Corinthians side in Castletreasure. A heavy defeat, but the lads return to league action next time round and will relish the chance to put this one behind them.

Thanks to Crosshaven for holding an U11 blitz on Sunday afternoon. 4 clubs, Crosshaven, Corkbeg, Bandon and Kanturk. All players played 6 matches and the lads came away delighted after some great games