Corkbeg travelled to Whitechurch on the opening Sunday of the 2021-2022 season to play Waterloo in the Mossie Linnane League Cup, but shorn of a number of first team regulars, they were soundly beaten 4-1 by the home side.

Waterloo were quickly out of the blocks and found themselves 2-0 up after only 15 minutes; Danny Whittington with the first and a stunning second from Tom Flaherty. But, before the first water-break, Tariq Tynan found Jordan Ryan with a great pass and Jordan rifled home from an acute angle. Jack Farmer also had a free kick brilliantly saved by the Waterloo goalkeeper, while both Tariq Tynan and Killian O Driscoll saw decent long-range efforts narrowly miss the target.

But, it was the home side who were largely on the front foot and regained their two goal lead, when Brendan O Donnell volleyed in from the edge of the penalty area to make it 3-1. In truth, it should have been more before half time. 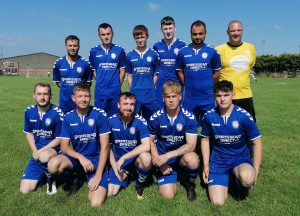 Corkbeg worked hard, but couldn’t match the Whitechurch sides intensity. O Donnell grabbed his second goal after 50 minutes, drilling the ball into the roof of the net from an acute angle to make it an uphill task for Corkbeg.

Corkbeg huffed and puffed with out creating much, but Tariq Tynan did see his close range shot brilliantly turned away by the Waterloo goalkeeper and he also drove another good opportunity high and wide.

Not a great result, but not a bad workout either on a sweltering hot morning for football. Killian O Driscoll & Josh Leahy made their competitive debuts for Corkbeg, while Colin Horgan, David Hickman and Dylan Casey turned in good performances over the 90 minutes. The lads are at home to Dunbar Celtic next Saturday afternoon in Whitegate.