In the Mossie Linnane League Cup, Corkbeg and Dunbar Celtic drew 2-2 on Saturday afternoon in Whitegate.

Probably a fair result after an exciting 90 minutes, but having led the game 2-0 and missed numerous chances, Corkbeg will feel they should have closed the game out.

Tariq Tynan should have given Corkbeg an early lead, but failed to hit the target, while at the other end, Corkbeg goalkeeper John Manning pulled off a stunning right handed save to deny the city side. All this inside the first 10 minutes. Kevin O Hanlon and Tariq Tynan were proving a handful for Corkbeg and Dunbars goalkeeper was quick off his line to make an excellent save from O Hanlon as he bore down on goal before the water break.

Corkbeg got the goal that they deserved on the half hour. O Hanlon had a shot blocked, but the ball rebounded to Jordan Ryan, who fired in a brilliant volley from the edge of the area to put Corkbeg ahead. It should have been two soon afterwards, but Stephen O Hallorans close range finish was incredibly ruled out for offside.

Early in the second half, Corkbeg doubled their lead. Jack Farmers free kick was well saved by the Dunbar goalkeeper, but substitute Dylan O Neill thumped the ball to the roof of the net to make it 2-0. Within two minutes, Dunbar had a goal back, when Ross Hickey scored from the spot. And three minutes later, a great through-ball from midfield saw Dunbars midfielder Willie McCarthy through on goal and he fired a great strike to the roof of the net to leave it 2-2 after 55 minutes.

There would be no further goals, despite good performances for Corkbeg by Jack Farmer, Jordan Tynan & Dylan O Neill in the second period. But both teams had chances to win it; Dylan O Neill had a shot well saved and Shane Bennetts rebound was somehow taken off the line, while Stephen O Halloran drove a shot over the bar from only 6 yards out. While at the other end, a fine effort at the back post thumped against the Corkbeg crossbar and away to safety. Corkbeg played well today and will be disappointed not to have come away with the win. 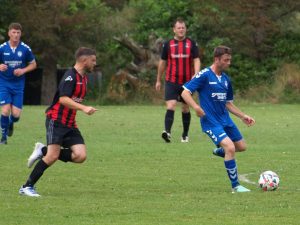