Corkbeg advanced to the next round of the Munster Junior Cup, with an excellent win over West Cork League Champions Drinagh Rangers in Whitegate on Sunday afternoon. It was a hard fought, but deserved win for the home side in a game played in monsoon-like conditions in Corkbeg.

Drinagh were the better side in the opening half and Corkbeg goalkeeper Ray Savage was twice called into action early on, saving well on both occasions. The away side went ahead on 25 minutes when a ball to the back post was headed across goal and tapped home from close range. The goal forced a response from the Beg, with Aaron Berry heading over and Tariq Tynan heading narrowly wide. As the half drew to a close, Shane Bennett had a header taken off the line and Jordan Tynan volleyed narrowly wide, while at the other end, Drinagh had a header from the edge of the box that missed the target by inches. 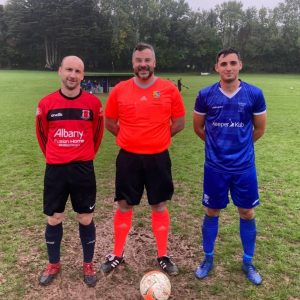 Corkbeg started the second half better and Aaron Berry had a shot deflected narrowly wide. Corkbeg equalised on 55 minutes, when substitute Bobbi Donoghue played a great through-ball to Tariq Tynan, who saw his shot well saved, but Aaron Berry was on hand to slot the rebound home to make it 1-1.

Corkbeg got the winner on 73 minutes, when another fine piece of interplay from Donoghue & Tynan, saw another good save from the Drinagh goalkeeper, but Alan Hogan pounced on the rebound for a 2-1 lead. Drinagh came close to an equaliser before the end, when a free kick to the back post found their winger, but he failed to hit the target, while Savage was called into play to make another good save on 82 minutes.

But, with man of the match, Keelan Kennedy, in top form in defence, there was no further scoring and Corkbeg advanced to the next round.